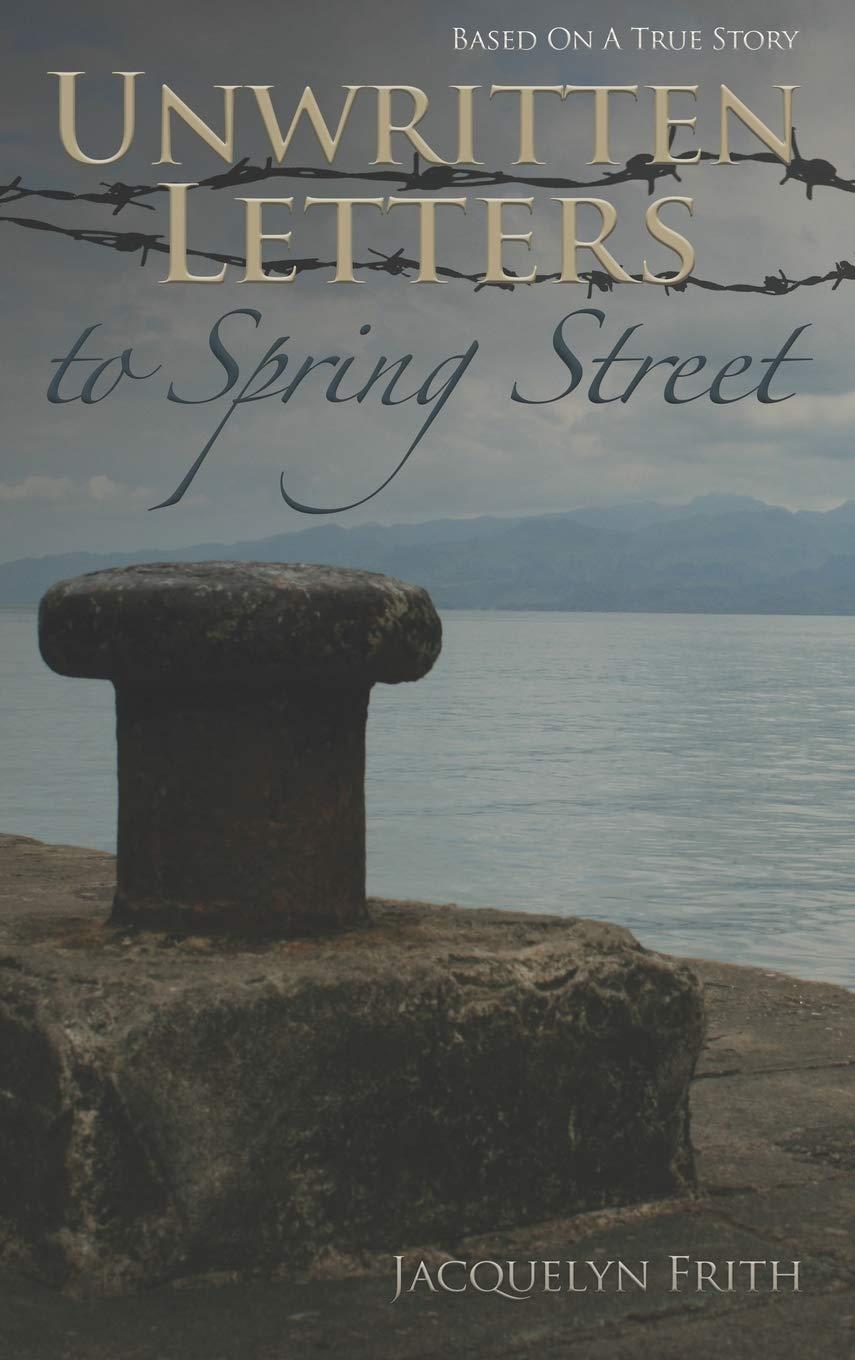 Summary:
December 1941. Jack Frith left his family and his life to go to war like so many others, uncertain whether he would come home. Whilst in a convoy bound for the Middle East the Japanese attacked Pearl Harbour, triggering Allied entry into the Pacific War. Hastily regrouped and ordered to the Far East, the now ill-equipped convoy peeled off for Java and elsewhere. Slipping the moorings, Jack could not have known that years of captivity and brutality, starvation and forced labour, and yet worse, awaited him.

This is no cry for revenge but justice, laying bare actions and exposing inaction, demanding long overdue apologies and uncovering past atrocities. It is also a moment of reflection on the forgotten armies of the Far East, in remembering each subsequent generation owes a great unpaid debt of gratitude to those who gave so much for our present freedom. The price of that freedom was by no means free.

Jack hesitated for a moment, breathing heavily. Through his mind passed a lifetime of consideration and terrifying visions. Within a    few frantic displaced seconds his thoughts swung from demanding   he leap into the boiling sea to distractedly wondering if he would survive the fall. His mind swam with images of home and his family, and of all he had endured, all he had survived. Now all to be washed away. Disconnected to the unfolding horror before him, he pondered in that single blink, the dark depth of the water and worrying height of the deck, the inevitable long plunge and the lurching list of the ship. He was not aware if he spoke yet he noticed his mouth flapping open like a fish suffocating in air. Frighteningly, his thoughts became magnetically absorbed by the ominous throb and sucking power of the ship’s propeller. Its laborious heaving rumbled unseen, deep under the ship, vibrating the metallic hulk and pulsing every cell in his body. He breathlessly imagined himself exposed, drowning, being helplessly drawn face to face with its hypnotic danger as a second explosion abruptly caused its shuddering halt, shattering his thoughts. He gathered himself, his mind wild and alight with indecision. He hardly noticed peripheral flickering fire and spectres of men leaping in the edge of his vision as he swayed unsteadily, terrified to make his choiceless decision. Then, clear through the cacophony a solitary voice pierced his frightened deliberation. “Abandon ship!” it screamed in Japanese. Jack didn’t understand the words but heard their desperate meaning. He had fumbled to the conclusion that the unknown ocean depths and sickening fall were marginally safer than the imploding deck of their torpedoed ship.

Off guard and caught in immobile motion as the voice rang out, Jack startled into action. He began the deep inhale, the drawing of breath in preparation for his plunge, but was cut short as a final fireball explosion rocked the ship, sending a bellowing reverberation along its length. The concussive blast hurled Jack overboard so ferociously he had hardly taken breath in his lungs and had no understanding he had fallen until he was deep underwater, falling in a cascade of light and fire. The slowing of time and the drawing out of each action happened simultaneously. The fearful hesitation, decision to jump, shout to abandon ship, inhalation, explosion and plunge, all punctuated by wrenching doubt. And yet throughout, not once had he considered the temperature of the water. It had been hot and clammy as the ship lurched somewhere on the Flores Sea. Sweat had clung to him like     a damp rag, and Jack could not have imagined the sea would be so numbingly cold. Darkened time washed over him and he was lost.

In that same moment the ship shuddered, the inky sea swallowed him instantly, just one greedy gulp and he was gone. He could not grasp he was underwater or that he was sinking as he dropped down and down, a falling deadweight. The slight impact of his thin body slicing the thick surface of the water disassociated itself from the sharp sting of salt clenching his eyes shut. He keenly sensed the cold, oily sensation of water as it slid over and completely covered his parched sunburnt skin but he watched from another place, some other life. A moment earlier he’d watched himself arc overboard, bare feet high in the air, buckled knees bent, hands rounded as if still gripping the gunwale rail. Jack had watched himself, mute and expressionless as the rail fell away, disappearing into sparkling black, as the ocean submerged him. The thick water thundered round his ears like a steam train in a tunnel, all oil and smoke and exploding fire, and hell it was cold.

Jacquelyn Frith is a postgraduate archaeologist and writer previously specialising in medieval metallurgy and scientific finds analysis, and although she has written many papers, articles and an MPhil thesis, this is her first actual book.
She begins PhD study on the International War Crimes Tribunals in the Far East 1945-1949, and the memorialisation of British Far East Prisoners of War from Java and Ambon: Suez Maru case study, in the autumn. She has also begun her second book, on the so-named ‘D-Day Dodgers’ of Salerno, which may also take ten years to complete.
Wesbite: www.unwrittenletterstospringstreet.co.uk
Facebook: http://www.facebook.com/unwrittenletterstospringstreet 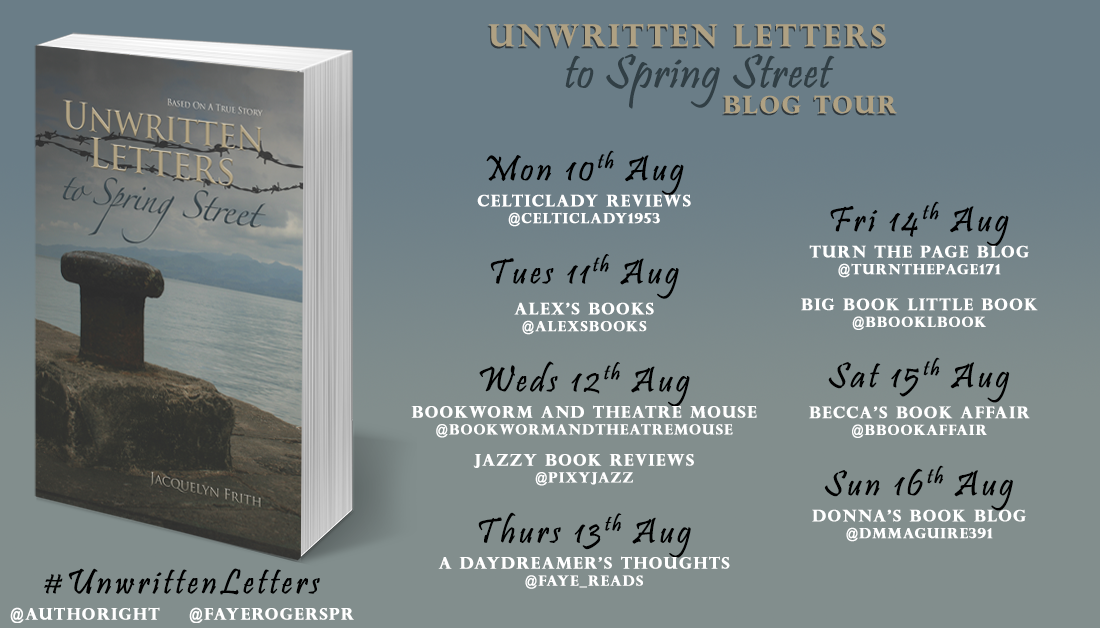 Please try not to spam posts with the same comments over and over again. Authors like seeing thoughtful comments about their books, not the same old, "I like the cover" or "sounds good" comments. While that is nice, putting some real thought and effort in is appreciated. Thank you.